Over the years, Susan G. Komen has awarded grants to nonprofits that provide breast cancer patient navigation services to women in the National Capital Region.

One of the beneficiaries of our community health grant award is the African Women’s Cancer Awareness Association (AWCAA). AWCAA was established in 2004 as a non-profit organization dedicated to improving access to health care services to African women with cancer through education, resources, training and patient navigation services.

AWCAA has helped a number of women, like Esther (not her real name), a 44-year-old mother of three from Sudan. She found a lump in her breast and initially did not share this information with anyone. She eventually told a close friend, who introduced her to Hanan Eltayeb, an AWCAA patient navigator based in Alexandria, Virginia. Hanan and Esther met at a coffee shop, and Esther expressed fear of having further breast examinations. Having lost a sister and a cousin to breast cancer, she feared the same thing would happen to her. Hanan shared her personal story as an African immigrant and a breast cancer survivor. She also shared information about AWCAA and the available services made possible through a grant from Komen, as it is related to working with women with abnormal findings and breast cancer diagnosis. Later, Esther contacted Hanan and she was guided into the breast cancer continuum of care and directed to Howard University Hospital Cancer Center, another Komen grantee. 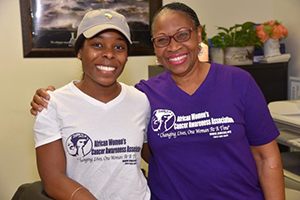 Esther was diagnosed with stage three breast cancer, and Hanan navigated her through treatment in culturally and linguistically appropriate methods and resources. Esther is now in remission and taking hormone treatment. She expressed her deep appreciation and gratitude for the support she received from Komen through AWCAA. In fact, she wrote a thank you letter to the organization. With help from the African immigrant community in Alexandria, she has now relocated with her sister to another state, but she keeps in touch with Hanan.

It is stories like this that inspire us to stay committed in our fight against breast cancer. But this couldn’t have been possible if not for partners like you who donate to this cause.